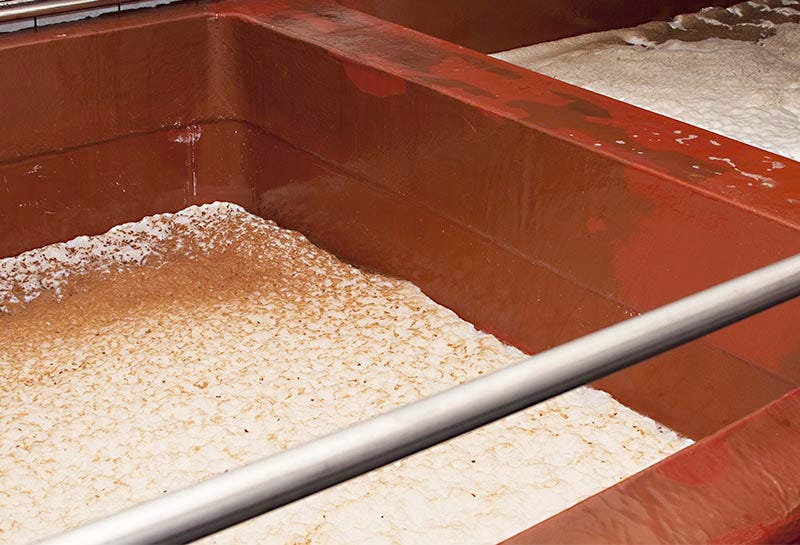 Part 1: A Wild Surprise
Destination breweries known for their hazy IPAs have become quite the fad as of late, and many in the consumer community have benefitted from it. Learning a particular hop’s unique qualities and how the brewer is able to bring them out is an awesome testament to how brewing has changed over a few decades. Walking into one of those breweries, the energy is often palpable with the buzz of chatter about the latest hop…which is…

The scene: Someone hollers and raises a stemmed glass to cheers a distance away. The color is vibrant and pink but… not hazy. The bar has a few delicately designed boxes at the corner that are definitely not in the style of the brewery. Green bottles with a simplified wolf patterned with a stylized swipe of paint are being popped open and treated like gold. Some are cradled in a basket. The sign board proclaims “SPON SPON BING BONG” because this is a pop-up! A rare chance to see this beer in the wild. Of course, it is wild, it is literally spontaneous!

From glass to glass, the varietals of these unique beers change in hops, fruit, and acidity. Aged in barrels and blended to perfection, it is no wonder that Primitive Beer won a silver medal in the Experimental Beer category at 2019’s Great American Beer Fest with Shibbleshabble. However, many people blend barrels and add fruit to beer, but spontaneous fermentation is a completely different (patient) experience.

Part 2: Inoculation
Spontaneous beers begin like any other beer, but where they stand out are in their transfer into a koelschip (pronounced coolship). A koelschip is a traditional shallow pan that hot, unfermented wort is cooled in overnight while exposed to the outside air. During this time, natural microbes in the air inoculate the beer. The following morning, the beer is transferred into a variety of fermentation vessels.

Not every yeast or bacteria will work in the wort, but many of our favorites that are usually viewed negatively in the more typical styles, flourish. Breweries that explore this method can be located in a variety of environments. Some are on orchards and farms with blissful clean air, but more than one award winner has been brewed with air floating in from adjacent alleys in a bustling metropolis. The microbiota can vary significantly, but there are a few stand outs.

Part 3: Yeast
Yeast is everyone’s best friend when it comes to fermentation for one main reason: alcohol. The use of yeast evolved over centuries to focus on particular strains to produce a more consistent result. However, when it comes to spontaneous beers, the desire for the unusual and unique is what makes each brew strangely magnificent in flavor complexity.

Part 4: Bacteria
Here is where the real art comes in: harnessing the flavors produced by a variety of bacteria and understanding how they evolve over time. As resources change and vary, different bacteria species rise and fall as the beer matures in the vessel. This aspect is still being studied, but one fascinating scholarly article goes into particular detail of our favorite (and sometimes problematic) prokaryotic friends.

Part 5: Adjuncts
In the course of fermentation, a brewer may decide if and when to add an adjunct based off of the flavors developing from the yeast and bacteria. Although these days, one can find a full range of debatable additions - ranging from climbing chalk and butter to pop tarts - to create a particular flavor profile, spontaneous beers have largely stuck with fruit and hops to further the depth and complexity of the beer.

Fruits: Stone fruits and berries are the most common. They may be added with the beer in the barrel or blended in at a later date. The fruits’ own microflora can contribute additionally to the microbes in the beer. There is no shortcut here; a brewer that wants to do a spontaneous beer justice will not use flavored syrups, oils, extracts etc. It would be sacrilege to fake fruit flavors in spontaneous beers!

Hops: Well known for their antimicrobial properties, hops are a great way to deal with some lactic acid that produce bacteria in spontaneous beers. Digging in further, it is a more complicated discussion and is often a mixture of fresh and aged hops.

Fresh Hops: Used for bittering flavors in many styles and has been historically used in some spontaneous beers like lambics.

Aged Hops: There are a variety of hops that are a few months to several years old because this results in the oxidation of the acids and oils. Although retaining some of the antimicrobial properties, these hops impart flavors like herbal tea, and a rather dull bitterness. These flavors are created by a variety of acids that become apparent as other compounds break down due to exposure to oxygen in the environment.

Part 6: Oxidation
Most people who imbibe beer believe they know oxidation when they taste it: a wet cardboard, old newspaper flavor that overcomes any goals the brewer had for enjoyment of the beverage. In actuality, there are multiple stages of oxidation:

Stage A: Delicious fresh beer that is the goal, if not close to it, or the vision the brewer had. It is fairly stable and reliable pint after pint. This is perfection for many styles.

Stage B: The hop aromas begin to decline, which is easier to observe in some styles of hazy IPAs. The hop pop goes, and other flavors begin to become apparent that could be considered comparable to overripe or spoiled produce. Staling can create the cloying flavors reminiscent of toffee. Some of these flavors are natural progression of the beer, others are due to mistakes in brewing.

Stage C: At this point, the papery notes of trans-2-nonenal become apparent and, frankly, the beer is considered worthless. This stage arrives as a result of time or poor packaging in most cases.

Stage D: This is the stage that most beers will never see because it can take years to achieve. The off-flavors that began to evolve in Stages B and C can develop further and create the subtlety and complexity that is admired in wines, but is all the more valued for what develops in spontaneous beers. In travels through Europe, it would not be unusual to hear someone compare a Belgian spontaneous beer at the same level to a fine French wine.

Part 7: Blending It All Together
To work with spontaneous beers, one has to be a little bit of a mad scientist and not afraid of the adventure that will ensue. Once the wort is in the koelschip, it is up to the beer gods to determine what goes through that open window or door. An assortment of microbes float in, hopefully not on anything multicellular, and so begins the race for resources. Fruit is added in at the beginning or perhaps later, continuing the flavor adventure. Hops are tossed in not necessarily for the bitterness, but possibly for toning down the bacteria presence and adding unique herbal flavors. Oxidation allows what would be negatives in other beers to evolve into delicate and complicated profiles. All of these factors combine together to create a spontaneous beer that can win medals and show off the brewer’s expertise.

However, it makes the disappointment quite palpable when the stars don’t align or, in this case, any of the parts described because a significant chunk of time, materials, and space seem wasted. Beers can go bad for a number of reasons and it is very sad, but it is especially unfortunate to watch a spontaneous vessel be dumped.

Not all is lost though! There is always an opportunity to “save” a beer with blending a couple of barrels together that can complement each other. It all depends on the brand and what the brewer can make work since it is all part of the adventure!

Spontaneous beers are definitely a unique style to come across but all the more lauded because of the nature and innovation that they result from. It is arguably one of the oldest fermentation experiments and what is more impressive is that it is still on-going! A great spontaneous beer can capture the mind of both the scientist and the dreamer. Grab a glass and SPON SPON BING BONG!

About the Author
Emily received her Bachelor of Science in Biology and Chemistry from Le Moyne College in 2009. Having always nurtured a passion in microbiology and chemistry, Emily has always enjoyed being in a laboratory environment. Her altruistic nature and desire to care for others gave her eight years of success in the medical field and acceptance into medical school. After choosing to forgo medical school, Emily moved to Colorado looking to rekindle her passion for the laboratory sciences. After a hard weekend of enjoying craft beers, Emily decided to grab life by the pint glass and founded Fermly in 2018. Emily is a Certified Beer Server in the Cicerone program and a provisional BJCP judge.